Smart LighTIng involves communication and sensing functions that enable remote control (turning on or off, dimming or changing colors) and monitoring (remote diagnostics) of one or more fixtures in a building, street or home. Intelligent lighting also provides information to the luminaire that allows it to be tuned for use depending on usage or ambient light. On the other hand, high-brightness white LEDs are ideal for area lighting applications, with better directionality, better color quality, environmental protection, etc., and can be more easily controlled to turn on and off, allowing automatic detection of ambient light to change brightness. It is gaining more and more attention in applications such as smart LED street lights.

Intelligent lighting communication can be achieved with wireless or existing power line infrastructure. The power line is the world's largest copper infrastructure, with power outlets in every corner of the home or office building, making it an extremely wide-ranging network.

Since all lighting fixtures are connected to the power line to convert electricity into light, power line communication (PLC) has become a reasonable way to communicate the main communication and control links of intelligent lighting.

For example, using ON Semiconductor's PLC modems (such as AMIS-49587), PLC line drivers (such as the NCS5650), and ambient light sensors such as the NOA1302, it is easy to build a networked LED street light intelligent control system based on power lines, which helps municipalities, Power companies and commercial enterprises remotely adjust the light output of street lights to reduce the overall energy consumption of their street light networks. In addition, in building intelligent temperature regulation and lighting control applications, KNX transceivers can also be used on twisted pair cabling to control lighting with the KNX network. 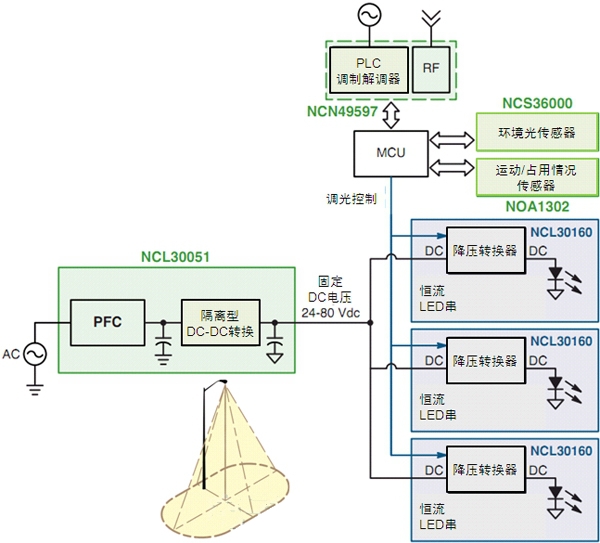 Figure 1 Overview of the modem, power supply and sensor solutions for intelligent LED street lights by ON Semiconductor

Power line communications help utility companies add a higher level of functionality to their distribution networks, allowing consumers to better manage their own energy consumption. ON Semiconductor offers a range of leading spread-spectrum frequency shift keying (S-FSK) PLC modems such as AMIS30585, AMIS49587 and NCN49597. Among them, AMIS-30585 and AMIS-49587 are based on ARM7 core microcontroller (MCU), only support AC work, the maximum baud rate per channel is 1.2k and 2.4k respectively; the newly introduced NCN49597 is based on ARMCortexM0 core MCU, and supports AC and DC work, the maximum baud rate per channel is 4.8k, supporting the Cenelec A, B, C and D bands, and providing programmable software. It is also expected that the NCN49599 PLC modem with integrated power amplifier function based on NCN49597 will be launched in the second half of 2012.

2 KNX Transceiver and Evaluation Board

The KNX transceivers from ON Semiconductor include the NCN5120, NCN5121, NCN5110, and NCN5111, which can be used to connect electrical appliances and sensors to provide temperature and light control for the 9600 baud KNX twisted pair (TP) bus in a building. The twisted pair bus provides data communication and power supply.

It is worth mentioning that ON Semiconductor and NXP Semiconductors recently jointly launched an evaluation board and a complete reference design for an energy-efficient twisted pair network. This evaluation board uses NXP's low-power Cortex-M0 microcontroller LPC1227 and ON Semiconductor's NCN5120 receiver-transmitter IC to help building automation customers streamline the design process and apply the energy-efficient KNX twisted pair solution. For lighting switch and control, heating, ventilation and air conditioning (HVAC) control, blinds and occupancy detection applications.

ON Semiconductor's NCS36000 passive infrared controller is used in the lighting and occupancy sensing market to amplify and regulate signals from PIR sensors. The device operates from 3.0V to 5.75V, integrates a low-noise 2-stage amplifier with an internal reference voltage-driven sensor, an internal oscillator with an external RC, single-pulse or dual-pulse detection, and a digital filter for maximum Limit false alarms; drive LEDs and relays directly. The device is a very flexible solution, customers can customize digital filtering and analog processing for a variety of sensors, BOM cost is lower than similar discrete solutions.

Ambient light sensors are also important components for building intelligent lighting. ON Semiconductor's ambient light sensor has design flexibility, can be adjusted in the EEPROM as needed, custom filter 0.0125lx detection (ie, clear light response); in addition, with dark current and temperature compensation, minimum per-resolution bit power consumption; The high-speed mode I2C interface does not affect the bus operation when the power is turned off.

The preferred method of driving the LEDs is to connect the LEDs in series so that the currents in the LED strings match to the same brightness. Although the LED is very reliable, if any LED fails to open, because the LED string is connected in series, the whole string of LEDs will be extinguished, which is unacceptable for high-reliability applications such as street lighting. To solve this problem, the NUD4700 can be used to bridge each LED. This shunt bypass protector ensures that the rest of the LED string is always lit when an LED fails open. The NUD4700 features high on-state current capability and low-off-state leakage, and can be automatically reset to off if the LED is restored; the repeatable response time is short. Its high reliability helps to extend the life of LED strings and lamps, enabling LED strings to operate at high currents, making them suitable for high-reliability applications such as street lighting, tunnel lighting, architectural lighting, high ceiling lighting, and train and runway lights. .

Figure 4 Protecting the LED string with the NUD4700

ON Semiconductor offers die-level ESD protection products that can be used in conjunction with HBLEDs in optical hoods. In-module silicon transient voltage suppressor (TVS) dies provide the protection needed to eliminate faults and help create rugged HBLED modules for a variety of applications. There are two types of silicon TVS dies in the module: sub-mounted protectors and side-mounted dies. For example, the CM1771 is a 100V back-to-back electrostatic discharge (ESD) protection device with a proprietary side-mounted construction that withstands high levels of ESD strikes, and has a small footprint and low height. Protect HBLED die and HBLED modules during assembly and luminaire assembly to prevent malfunctions.

In order to achieve energy conservation and environmental protection, government agencies, power companies or commercial enterprises are striving to build a networked LED street light intelligent control system or intelligent building control system, using the ambient light/distance sensor integrated in the system, according to the brightness and occupancy of ambient light. Information such as the situation to automatically adjust the light output of the LED. ON Semiconductor's advanced communications, sensors, KNX transceivers and protection solutions help reduce the total energy and cost of the lighting network for a powerful and environmentally friendly LED lighting system.

Festoon bulbs are usually be used as interior lights, trunk light, glove compartment lights and license plate lights. There are many different types of interior bulb. Interior lights for indoor lighting are usually installed in the center of the car interior. It's better to light up the car interior evenly. The trunk light is a humanized device. When the lid is opened, a light is automatically lit in the luggage compartment to make it easy to pick up. Glove compartment lights is usually be installed  in front of the front passenger side small storage space. Licence plate bulb illuminate sign on a vehicle that shows its registration number. License plate lamp is at night or when the sky is dark and wide light open together to light the lamp, according to the relevant provisions of the licence, all vehicles when driving at night, must be open after the car license plate lamp.