At present, China's smart phone users are close to 500 million, the penetration rate of smart phones has reached 50%, and the penetration rate of LED flash (FlashLED) in smart phones has reached 100%. According to industry survey data, the number of global smartphone shipments will exceed 1 billion units in 2014, and each smartphone will be equipped with 1~2 Flash LEDs. In 2013, the total global FlashLED shipments will reach 1.029 billion. It is estimated that shipments in 2018 will reach 2.074 billion.

Looking ahead to 2018, the overall Flash LED revenue and output value will grow from $561 million in 2013 to $764 million. As the standard high-end mobile phone standard LED flash (Flash LED) has won the favor of mobile phone manufacturers with various advantages, and there has been a "hot air" in the mobile phone industry.

Recently, the exposure news about OPPO N3 has emerged one after another. First, the N3 renderings flow out, and then the official revealed that the machine will use liquid metal-like materials and ice nest cooling system. Just yesterday, OPPO officially showed a back photo of OPPO N3. It can be seen from the official Weibo that this mobile phone uses a 16 megapixel lens and has a dual LED flash, giving a feeling of height. 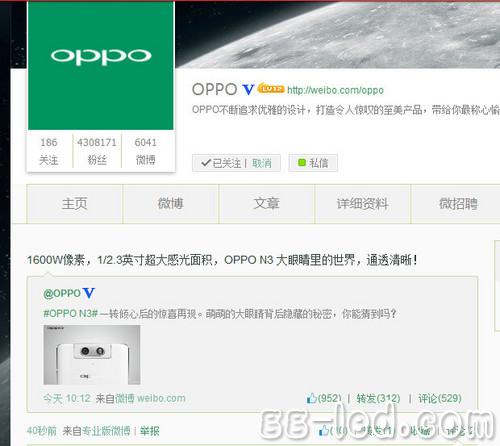 OPPO officially first issued a document saying "A surprise reappear after a turn of heart. The hidden secret behind the big eyes of Meng Meng, can you guess?" and attached a picture of the LOGO and lens on the back of the N3, followed by OPPO Guan Wei also forwarded this microblog, and issued a document saying "1600W pixels, 1/2.3 inch large photosensitive area, the world in OPPO N3 big eyes, clear and transparent!"

Although OPPO official microblogging is more subtle, but according to insiders, OPPO N3 will use 16 million pixel camera, the size of the photosensitive element is 1 / 2.3 inches, a single pixel size of 1.34um, compared to OPPO Find 7 increased by 20% From this, it can be seen that the camera's photo level has improved a lot. At present, the date of the release of this mobile phone on October 29 is not far off. Friends who are interested in OPPO N3 should continue to pay attention to the follow-up reports of mobile phones in China.