The Anti-Lock Brake System (ABS) is an active safety device that is an abbreviation of Anti-lock Braking System or Anti-skidBraking System.

This article refers to the address: http://

The electronically controlled anti-lock braking system is based on the original braking system of the automobile, and an electronic control system is added. The function is to automatically adjust the braking force of the braking system to the wheel during the braking process of the vehicle. When the tire interacts with the ground, it prevents the wheel from locking, thus obtaining the best braking performance, improving the directional stability, enhancing the steering control ability, preventing the side slip and the tail, and reducing traffic accidents.

When the driver is in the process of braking, when the driver finds that there is an obstacle or road in front of him, he needs to decelerate or stop, and then the accelerator pedal is pressed off the brake pedal, and the hydraulic (or pneumatic) brake system is used to make the brake unable to rotate. The shoe presses against the brake drum (or brake disc) that rotates integrally with the wheel, so that the wheel loses its ability to rotate, and the rolling friction between the wheel and the ground becomes sliding friction. Under the action of tire and ground friction (adhesion), the wheel decelerates or stops, and the car body slows down or stops.

However, if the brake hydraulic pressure (or air pressure) is insufficient for the brake shoe or the brake shoe is too large for the brake disc, the wheel cannot be decelerated or braked even on a good cement or asphalt road; If the brake hydraulic pressure (or air pressure) is too large, the wheel will be completely locked and not locked. If the current wheel is locked, the steering mechanism will be out of order; when the rear wheel is locked, the lateral adhesion will be greatly reduced, and it will be in the centrifugal force or the road surface. Under the influence of the situation, the occurrence of slip or tail is more dangerous.

When V>Vw, the forward movement speed of the car body is greater than the tangential speed of the rim, indicating that the brake is decelerating, and the slip ratio is 0.

How can I control the slip ratio between 10% and 30% so that the wheel has both rolling and sliding? In the absence of ABS cars, experienced drivers use the brakes on the brake pedals to relax and roll, and ABS can automatically achieve this. Using the wheel speed sensor (or increasing the deceleration sensor), you can sense wheel acceleration (Vwâ†‘), wheel deceleration (Vwâ†“), wheel lock (Vw=0), based on these signals and the original set acceleration, deceleration When the threshold is compared, it can be processed by the ABSECU, and the relevant solenoid valve can be energized and de-energized to form a process of boosting, holding and depressurizing in the wheel brake cylinder to control the slip and roll of the wheel. The continuous process of slipping, rolling, ..., so that the steering mechanism is still effective during braking, preventing tail and side slip.

2 The composition of the wheel ABS

The Odyssey Sedan ABS consists of a vacuum-assisted hydraulic brake line (conventional hydraulic brake system) and an electronic control system. Figure 1 shows the location of the various components of the ABS on the vehicle. Figure 2 shows the connection relationship of the ABS hydraulic brake pipe: two thick and short black lines indicate the connection between the brake master cylinder and the liquid regulator; on the right side of the right, the two nozzles lead to the right side Brake wheel cylinder; on the left side, the two nozzles lead to the front and rear wheel cylinders on the left side.

Figure 3 shows the typical shape of the typical ABS components, and illustrates the hydraulic line connection between the brake master cylinder, the hydraulic regulator, and each brake caliper (wheel cylinder), and also shows the various wheel speed sensors and ABSECU. The connection relationship, which is also related to ABS alarm lights and diagnostic sockets. 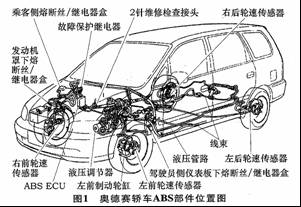 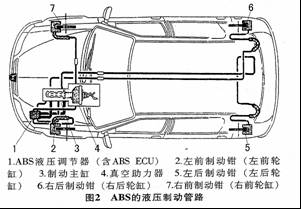 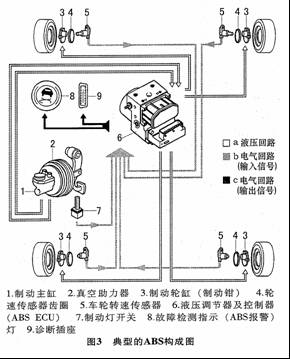 ABSECU is the control center of ABS. Its function is to receive signals such as wheel speed sensor, brake light switch and parking brake switch. According to the set control logic, output control commands are calculated and logically judged to adjust and control pressure regulation. The solenoid valve of the device adjusts the brake pressure of each wheel brake cylinder.

The hardware of ABSECU consists of a single-chip microcomputer on a printed circuit board and a series of electronic components. Most of them are digital circuit chips with high integration and fast operation. They are packaged in a metal case to form a single unit. The software is a series of control programs and a large amount of measured data, stored in read-only memory (ROM). Although the internal circuits and control procedures of the ABSECU of each model are different. But its basic composition is roughly the same, as shown in Figure 4. 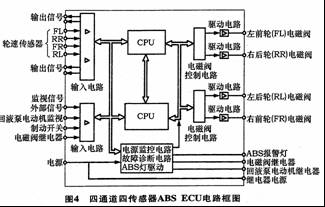 The calculation circuit is the core of ABSECU and is mainly composed of microprocessor CPU. Its function is to perform mathematical calculation and logic judgment according to the input signal of the wheel speed sensor according to the program set by the software, and form corresponding control instructions. For example, the instantaneous linear velocity Vw of the wheel is calculated according to the wheel speed signal, and then the acceleration (decrease) speed, the initial speed vo, the reference vehicle speed and the slip ratio are obtained, and finally the corresponding control command is formed according to the addition (decrease) speed and the slip ratio. Then, the solenoid valve control circuit outputs a signal that the brake pressure is "raised", "held" or "decreased".

In the ABSECU calculation circuit, there are generally two CPUs: one for the control CPU and the other for the safety CPU. Two CPUs receive the same input signal. During the operation process, the processing results of the two microprocessors are compared through communication. If the results are inconsistent, the CPU immediately stops the ABS from working, preventing the system from malfunctioning and causing error control.

The calculation circuit can also monitor the wheel speed sensor, the liquid return pump motor, the solenoid valve relay working circuit, etc., when it is detected that they are not working properly, immediately output a command to the safety protection circuit to stop the ABS.

The main function of the output amplifier circuit is to convert the digital signal output by the CPU (such as control pressure rise, hold, decrease signal) into an analog signal, drive the actuator through the power amplifier, and provide different sizes to the actuator (each solenoid valve). Control the current. For example, Toyota and Bosch ABS, each wheel has a three-position three-way solenoid valve with OA, 2A or 5A current at different slip ratios, which can achieve â€œriseâ€, â€œholdâ€ and â€œwheel brake pressureâ€. Drop "three kinds of working conditions.

The safety protection circuit consists of power supply monitoring, fault memory, relay drive and ABS indicator drive circuit. Its main function is to receive the voltage signal of the battery (or generator), monitor whether the power supply voltage is within a stable range, and convert the 12V (or 14V) power supply voltage into the 5V reference voltage required for the ABSECU to work.

In short, because the microprocessor has a monitoring function, the circuit can control the relay and ABS indicator circuits according to the instructions output by the microprocessor. When it is found that the fault affecting the ABS operation (such as the power supply voltage, the wheel speed sensor signal, the calculation circuit, the solenoid valve control circuit, etc.), the CPU will issue an instruction to cut off the power circuit of the ABS relay, so that the ABS stops working and resumes braking. The system's normal braking function plays a role in fail-safe protection, and at the same time, the ABS indicator on the instrument panel lights up, reminding the driver to repair in time. ABSECU also has a fault memory function. When the ECU detects that the ABS is faulty, in addition to the control to perform the above actions, the fault information is also coded and stored in the memory to prepare the code for self-diagnosis for reference during maintenance diagnosis. .